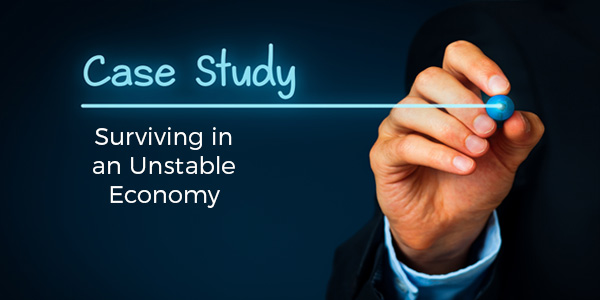 Outsource Corporate Partners, LLC (OCP) knows from experience the importance of preparing for and surviving hard economic times – even when times are good – and all points in between.

The extremely difficult years in the late 1970s and early ‘80s saw staggering 21.5% interest rates and 18% inflation, which resulted in a great consolidation and restructuring of OEM manufacturers and dealers. Freight slowed to a crawl and large fleets of trucks and trailers were parked. Instead of buying parts, dealers scavenged parts from those unused vehicles. Many good dealers were forced out of business by the lack of new equipment, sales and OEM manufacturers and dealers took a hit. When the economy stabilized, OEMs were still focused on consolidating and re-establishing their dealer bases lost during the bad economic times, all while independent distributors were becoming stronger.

The consolidation of OEMs and reformatted dealers produced a need to maximize all cash streams available to them. So over the next few decades, a great effort was made in building outstanding vehicles with improved driver comfort that cost less to operate per driven mile. At the same time, manufacturers worked on maintaining a long term and profitable build rate during sales cycles driven by engine and emission regulations. Used equipment was efficiently recycled, rental and leasing operations flourished at many dealerships and electronic sophistication moved into the parts/service arenas.

All of this improved the OEM business model for those of us that made it through those tumultuous years. Unstable economic times come and go, and OEM manufacturers and dealers are better off today as well as in the future by understanding the past. The need for manufactured products will continue at some level even during the worst of times. Manufacturers who make a habit of reduced cost and increased sales will do best during those times when slow to act dealers will not survive. And while working for a better outcome to happen by lowering costs to the fullest extent possible, we protect those areas of businesses that are generating growth and profitability, even during the worst case economic scenarios.

When manufacturers believe that they have reached or surpassed the top end of a weak cycle, too many variables exist for them to be comfortable with hiring needed personnel. The pressure to drive cost down to accommodate decreased sales typically leads to cutting all costs, including personnel when the economy isn’t stable. Usually field sales and training are the first to go while internal people are maintained to the highest extent in the belief that will keep the operation flowing. Then, at some point, the long term credibility of the company will begin to diminish.

Those initial drastic cuts are usually followed by the realization that the benefits of the layoffs cost the OEM business and profits more than they actually saved. At this point, the business needs to find a way to replace certain positions that are needed to get the job done. A cost cutting mandate will be a caveat for reduced costs and long term overhead. An internal compromise must be reached allowing that mandate to be met while still maintaining sales and profitability in the producing areas of the OEM.

Historically, OCP has taken the opportunity not only during similar economic downturns, but also in more prosperous times, to reach agreements with OEMs to outsource the hiring and training of specific task field personal that will not be temps or on your payroll. There is typically a significant cost savings to the OEM that takes advantage of this solution. When the OEM and OCP reach a field service agreement (with predetermined budgeted costs), OCP can then recruit some of the best people needed in the specific industry. We then field experienced people, manage the focused task agreed on without increasing the OEM’s headcount and reducing its cost.

Don’t wait until difficult economic times come knocking to plan for them. Our specialized solutions designed to specifically fit your OEM, will keep you competitive and thriving not only in good times, but will protect your sales and profits and enable your company to ride out the bad times – and all points in between.

Contact us to learn more about Outsource Corporate Partners and our specialized solutions for your OEM Manufacturer/Dealer.